Arts, Advocacy & Recognition by the Library of Congress

Working to rebuild community and identity in the aftermath of the Vietnam War.

Bryan Thao Worra is a talented Laotian American writer, poet and community activist and has forged a path connecting experiences of refugees with the restorative aspects of writing. Born in Vientiane in the Kingdom of Laos, Bryan was adopted at three days old by an American pilot named John Worra, who flew for Royal Air Lao. He arrived in the U.S. six months later and eventually settled with his family in Saline, Michigan. He joined the Rudolf Steiner Lower School in it’s fledgling years (early 1980’s), when the school had mixed grades and only two classrooms. After graduating from 8th grade at RSSAA in 1987, he went on to Saline High School and eventually Otterbein College.

Bryan’s leadership in the writing community is being acknowledged during a livestreamed event at the Library of Congress on May 2 in recognition of Asian American and Pacific Islander Heritage month. Appreciating his accomplishments, we reached out to him in order to learn a little about his thoughts on his Waldorf education and ideas around the arts and advocacy.

Your work over the last 20 years has focused on refugee resettlement and the arts. Can you tell us how you’ve connected with refugees through your writings and Southeast Asian diaspora?

The last two decades have taken me across the globe, searching for others who were scattered in the diaspora that followed the end of the Southeast Asian conflicts of the 20th century. I'd understood that many of the elders who were so fundamental to understanding how and why we are in America were passing away even as the younger generation didn't always know how to ask the questions they needed to preserve their family and community histories. In the United States, and in many parts of the world, those who don't understand their roots are often among the most easily exploited and many will find themselves adrift if they cannot understand who they have been, and how to express a future they see themselves in.

One aspect of my process has involved committing to a range of stories, poems, artworks and presentations on both the historical and the wildly imaginative, the cosmic and the everyday and to encourage my fellow refugees to consider different ways of expressing their own experiences and dreams. To give them the freedom to feel that it's ok to risk and to write more than one story, one poem, one idea to pass on to the next generation.

You joined RSSAA as a very young person. What do you remember about your experience with Waldorf education that has shaped your poetry and writing, or you as a person?

At first it was a startling experience, but a wonderful challenge engaging both my logical and creative sides. Our teachers there helped me find the confidence and initiative to direct my own learning and response to given lessons. One of the most important parts of that experience was creating my own textbooks. That absolutely impacted how I eventually made chapbooks and poetry collections later, and my enthusiasm for having experience on all sides of the publishing process. RSSAA prepared me for high school and college in such a way that I often felt way ahead of my peers and even a little out of place, enthusiastically seeking knowledge and ideas to share with others. It was always surprising to meet others who didn't have that energy and motivation. My years with RSSAA encouraged me to form lifelong friendships and to explore the deep connections between everything and to see my own experiences had a relationship to it all. 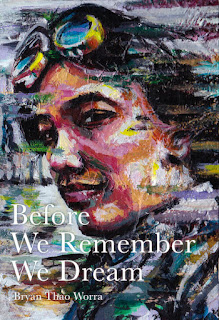 What role did the arts play for you as you grew up?

Growing up there weren't many books about my culture and my heritage in the encyclopedias or in popular culture. There was no clear timeline that helped me understand those essential questions: "Who am I? Where do I come from? Why am I here? Where are we going?" The arts provided a way to risk, and to experiment, to pose questions. They weren't legal depositions, but could often touch on great truths while I explored the questions of my identity and what it might mean to reconnect with others to rebuild our community after the war. Initially this was often a rather non-linear process but it became essential, much like the process in solving a jigsaw puzzle.

Do you have advice for young people who want to pair the arts with advocacy?

There are many ways to articulate a vision for a better world. Sometimes by showing a new model of possibilities, sometimes through warnings of unintended or even intended consequences. Each technique has its uses and limitations, and an artist will always face a particular risk with advocacy: Do we reinforce the existing arguments or dismantle them for something better? Pushback is possible with both. We have to commit to learning as much as we can on a given issue, and then we have to give ourselves permission to risk a new way of expressing what matters to us. And sometimes, an artist must find ways to avoid the inertia that comes from waiting for "the perfect" and instead seek "the good" and "the necessary" at a given point of time. As you get started, the key thing to remember is that you don't need to be the last word, but a word that gets the conversations started to create change.

The “Memory, Experience & Imagination in Works of Lao & Hmong American Authors” event will be livestreamed on Monday, May 2 at 6:30 pm EDT.  It will be available for viewing afterward in the Library's Events Videos collection.

Research Supports the Benefits of Arts Education
Cooking Up An Outstanding Language Program
Yes! Field Trips Are Worth The Effort!
Time in Nature can Spark a Lifetime of Science Curiosity
The Importance of Parent Education
School Trips as a Rite of Passage